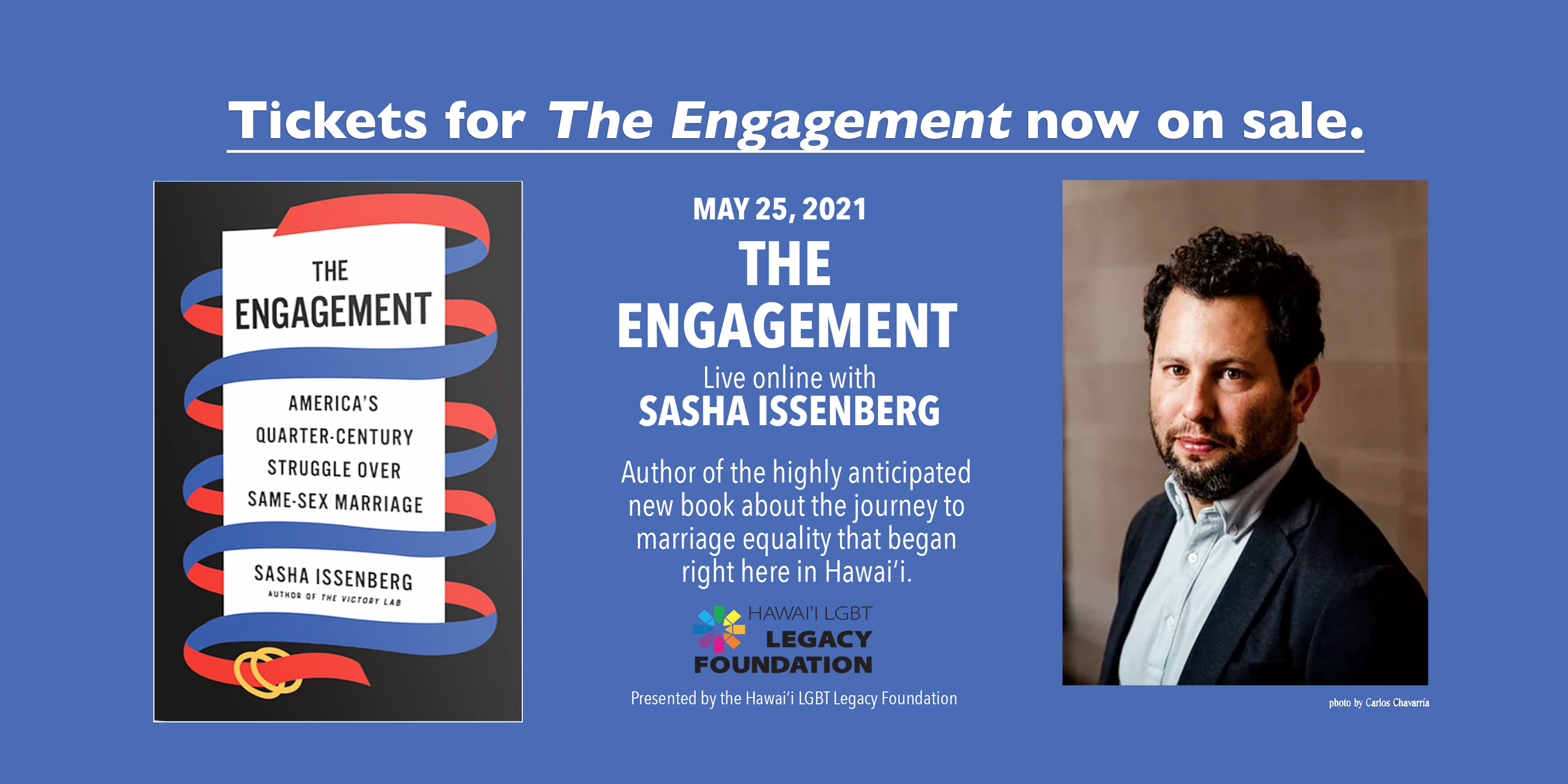 The journey to marriage equality began right here in Hawaii in 1991 when three same-sex couples sued for the right to marry, and the Hawaii State Supreme Court eventually found the state’s refusal to do so discriminatory. Hawaii was poised to become the first state to legalize same-sex marriage. Yet, marriage equality wasn’t achieved in Hawaii until 2013 when then Gov. Neil Abercrombie signed the Hawaii Marriage Equality Act. So what happened?

Join us online Tuesday May 25 from 6-8pm HST for a premiere special event with author Sasha Issenberg, speaking about how this remarkable episode sparked a national movement, as he discusses his latest book The Engagement: America’s Quarter-Century Struggle Over Same-Sex Marriage.

The Engagement will conclude with a Rainbow Town Hall featuring Hawaii panelists with unique perspectives from the courtroom and the Capitol. Moderated by award-winning filmmaker Dean Hamer, guests will include the Honorable Dan Foley, original plaintiff Genora Duncel, Hawaii Speaker of the House Scott Saiki and Hawaii Senator Chris Lee.

Tickets include a hard cover edition of the book or Kindle version, plus a signed bookplate from Sasha.

O: The Oprah Magazine included The Engagement on its list of “32 LGBTQ Books That Will Change the Literary Landscape in 2021,” calling it “part Grisham-esque legal thriller, part Sorkin-esque political drama, and part Maddow-esque historical yarn.”

Dean Hamer — (Moderator) is an Emmy Award winning filmmaker, New York Times Book of the Year author, and National Institutes of Health scientist with a long history in communicating complex and controversial ideas to diverse audiences.  His research helped change public understanding of human sexuality, and his innovative storytelling has led to popular books and documentaries on a variety of subjects, including the recent Oscar-shortlisted Kapaemahu.  He lives on the North Shore of Oahu with his husband and partner Joe Wilson.

Honorable Dan Foley – Distinguished jurist and champion of civil rights. He represented the plaintiffs in the original marriage equality suit against the Department of Health. His career has been rooted in civil rights equality in Hawaii. Today he serves as a nonresident Justice of the Supreme Court of Palau.

Genora Dancel – She boldly took on the cause of equality and public spokesperson as one of the original plaintiffs in a case that would be decided in her favor by the Hawaii Supreme Court.

Speaker of the House Scott Saiki – As a member of the Hawaii House of Representatives since 1994, Sen. Sakai was one of just a few members who voted against a proposed constitutional amendment in 1997 to authorize the Legislature to ban same-sex marriages. The tide against marriage equality was sweeping out then and few politicians were willing to risk doing the right thing.

Representative Chris Lee – As a freshman legislator in 2008 he boldly advocated for civil unions at a time when many saw even this small step, as too much, too soon. In 2013, he served as spokesperson for the Hawaii United for Marriage campaign. “It’s never the wrong time to do the right thing.”

We’ll be ordering all the hardcover books through Kaimuki’s own da Shop: books + curiosities, a local store that embraces the people and stories of Hawaii. You will receive an e-mail when the book is available for you to pick up (best option for people on Oahu). A kindle version of the book is also available. Shipping of hard cover books is not offered at this time. All prices include HI GET.A portion of the proceeds will benefit the Hawaii LGBT Legacy Foundation and our mission to support, empower, educate, unify, and facilitate LGBT organizations and individuals in Hawaii.

Sasha Issenberg is the author of three previous books, on topics ranging from the global sushi business to medical tourism and the science of political campaigns. He covered the 2008 election as a national political reporter in the Washington bureau of The Boston Globe, the 2012 election for Slate, the 2016 election for Bloomberg Politics and Businessweek, and 2020 for The Recount. He is the Washington correspondent for Monocle, and has also written for New York magazine, The New York Times Magazine, and George, where he served as a contributing editor. He teaches in the political science department at UCLA. Read his magazine, newspaper, and other published work here.