Try Think: About Gender – Transition to Self 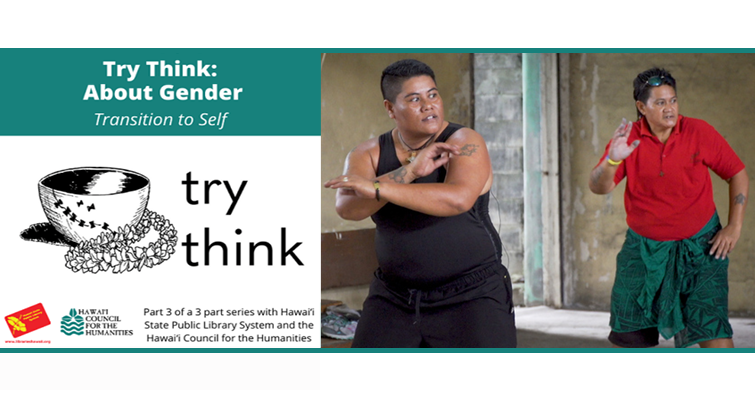 The Try Think Community Discussions are moderated by staff of the Hawaii Council for the Humanities, and the stimulus for this conversation is the short documentary, The Rogers of Samoa, produced and directed by Dean Hammer and Joe Wilson. Following the 16-minute film screening, attendees will connect with each other in community conversation; to share ideas, questions, and reactions to the film.

The film, which premiered at the Honolulu Rainbow Film Festival in 2020, is “an intimate glimpse into the lives of those who formed the first visible group of transgender men in the Pacific Islands – The Rogers of Samoa – as they build an outside oven, seek romance, and prepare to perform a traditional men’s dance in public. While still facing many obstacles, their stories illustrate the power that come when those rejected by society create their own community.” —Pacific Islanders in Communication

The mahu of Hawaii, leitis of Tonga and other transgender women are highly visible across the Pacific Islands and often play an important role in society. We made four films over the past decade bringing a diversity of stories from these communities to light, helping to humanize their existence in a sometimes unwelcoming, even hostile world.

As we traveled the globe for community engagement screenings with these films, the most frequent question we heard was “What about transgender men–are they out there too?” During a screening visit to Samoa, we were introduced to The Rogers, the first organized and visible group of trans men in the Pacific. Like many marginalized, misunderstood, and vulnerable communities, they were eager to share the realities of their lives, their hopes and dreams, fears and difficulties, and most important, their dedication to building a community that offers safety and support to those who have been told they are undeserving.

If you would like to view the film prior to the event, you can access The Rogers of Samoa on YouTube. If you would like to learn more about Emmy and GLAAD Media Award-winning filmmakers, Dean Hamer & Joe Wilson, and their film projects visit www.qwaves.com.